Fr. Loyola Amalraj: I would like to introduce myself with a brief biography.
On July 31, 1954, I was born in Valasu, a small place in Tamil Nadu in the south east State of India, to my late parents Anthony and Maria. My parents worked in St. Xavier’s grade school, our parochial school. My dad was the principal and my mom taught the third grade until an order of nuns began teaching at our school. I have three siblings: Henry, my oldest brother; Josephine, my older sister; and Paneer, my younger brother. Both Henry and Josephine each have two sons. While Henry’s sons live in India, Josephine’s sons came to study in North America. One went to Toronto, Canada, where he lives and works; the other to Los Angeles, CA, eventually living and working in Dallas, TX. Paneer’s daughter, my only niece, a medical doctor, went to study cardiology in Melbourne, Australia. I am also a great uncle.
When I was in the sixth grade, my mom introduced me to our pastor Fr. Pious Savarimuthu. I started to attend Masses and became an altar boy. My parents often invited Fr. Pious and later the nuns to our home for meals. The contact with the pastor and the nuns was the first spark of my interest in the priesthood. Early in my high school days, as was the custom in many counties, I attended the seminary for the Diocese of Coimbatore. From there, I went to Arul Anandar College for my undergraduate studies in philosophy and psychology. It was an experimental college where the seminarians studied with secular boys. That program was foundational to my later studies here in the US. After a year of break, I pursued my theological studies in St. Paul’s Seminary in Trichy, South India, and was ordained to the priesthood in 1981. I cannot believe I will be a priest for 40 years in 2021.
Beginning in 1981, I worked as an associate in three different parishes. From 1986-1990, I assisted parishes and educational institutions in the Diocese of Coimbatore, India. As Pastor and Diocesan Youth Director, I traveled many miles on motor cycles especially actively engaging teens and young adults of our diocese. I also served as Diocesan Catechetical Director and Performing Arts Director. Due to my association with the teens and young adults in the diocese, I recognized a great need for counseling. The late Bishop Ambrose encouraged and endorsed my desire to pursue my studies in counseling in the United States which led me to Marquette University, Milwaukee. At this Jesuit institution founded by St. Ignatius Loyola, my first name of Loyola may have been advantageous in my admission to the counseling program. As a full time graduate student at MU from 1990 to 1999, I assisted a number of parishes in the Archdiocese of Milwaukee.
In 1990-1991, I served as a resident priest at St. Wenceslaus Parish, Milwaukee. From there, I moved to Weakland Hall in downtown Milwaukee from 1992-1996. After completing graduate course work, I wrote my doctoral dissertation while serving as an associate with Fr. Jerry Rinzel at St. Leonard Parish in Muskego from 1996-1999. Opportunities came my way as I became temporary chaplain for the National Guard Reserves of Mitchell International Airport, Milwaukee. In Fall 1999, I was temporary administrator of St. James Parish in Menomonee Falls before becoming resident priest again at St. Augustine Parish, West Allis, from 1999-2000. At St. Camillus Health Center, Wauwatosa, I served as Pastoral Care Chaplain from 1999-2002 while I also was temporary administrator at Holy Assumption Parish in West Allis from 1999-2001 and resident priest there from 2001-2002.
After graduating from Marquette University, I was invited to serve in the Archdiocese of New York in 2002 where I was a Parochial Vicar at Holy Name of Mary Parish in Croton-on-the-Hudson, NY. While serving there, I offered numerous presentations as an adjunct program staff member at The Mariandale Center for Spirituality in Ossining, NY, and adjunct faculty of the Archdiocese of New York Center for Spiritual Development in White Plains, NY. As an adjunct faculty, I taught a graduate course on East-West Meditational Practices in the Religion and Religious Studies department of Fordham University, Bronx, NY.
In 2010, I served at Epiphany Church, New York City, followed by St. Martin de Porres Church in Poughkeepsie, NY, until 2011. Then I returned to the Archdiocese of Milwaukee to serve at St. Boniface Parish in Germantown from 2011-2018. In 2008, I became an Indian American citizen. I served as a board member of the Marquette University Graduate Alumni Association in 1999 and have been a member of the Knights of Columbus since 1996. Currently, I am a full-fledged fourth degree Brother Knight. My native language is Tamil and I am familiar with some similar languages of the southern regions of India.
My graduate program at MU offered me a rare opportunity to analyze contemplative prayer practices of various mystical traditions of some major world religions. How contemplative prayer practices affect one’s body, mind and spirit has been a passion of my life and its practice, the source of joy of my priesthood. I love to pray long contemplatively. It fulfills my heart’s yearnings and offers me fulfillment. My ministry is founded on my personal prayer practices that have transformed my life fully. But more importantly, praying contemplatively relaxes, calms me, and offers me a deep centering experience. I can say that praying has become my hobby
I enjoy reading, exercising, walking into the woods, listening to classical and country music. I hear so many good things about your parishes. You have touched the lives of so many guests and visitors who speak highly of you. I look forward to getting to know your leaders who are so dedicated, the staff who are so professional, and all of you warm-hearted parishioners. As your new pastor, I hope and pray that I will be blessed with wisdom from the Holy Spirit to guide and bless you in your spiritual journey and, in return, I hope you will bless and support me. 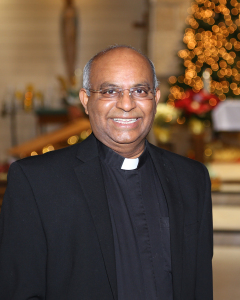